In Kamakura, there are the ‘Five Mountains of Kamakura’, which is basically the five great zen temples of Kamakura, and the fourth of them is Jochi-ji Temple.

In Japanese, the word mountain can be used for the greatest and the most significant temples as well, and the phrase ‘Five Mountains of Kamakura’ is used to the five greatest zen temples in Kamakura that were made during the Kamakura period(1185-1333).

The feudal government during the Kamakura period, called the Kamakura Bakufu in Japanese, made areas dedicated to protecting zen temples, and decided the Five Mountains of Kamakura, which has continued since then. The area around Jochi-ji Temple was protected under the Kamakura feudal government, and even today there are numerous temples such as Kenchou-ji, Enkaku-ji, Toukei-ji, and others. 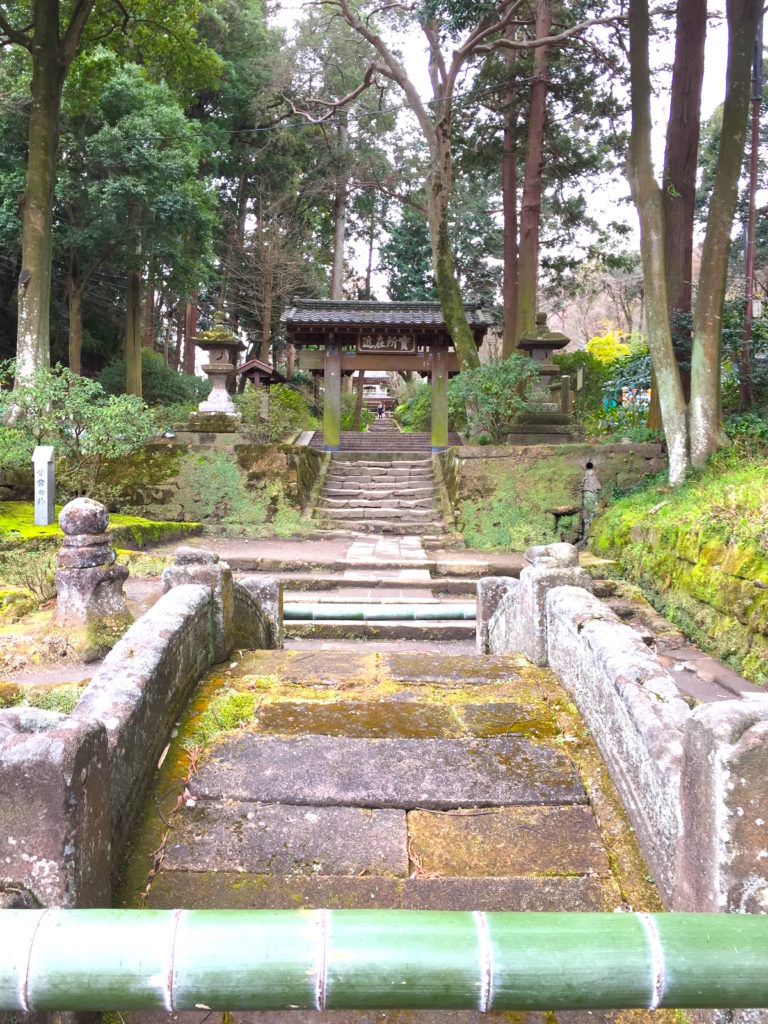 Jouchi-ji is about 10 minutes away from Kita-Kamakura station by walk.  The gate of Jochi-ji appears as you walk through the neighbourhood of Northern Kamakura. You can also visit this place from the hiking course that stretches from the Diabutsu.

The temple, like many other, is situated beside a hill, surrounded by forests.

You’ll find the entrance to the temple as you walk through the gate, along the path of stone stairs. 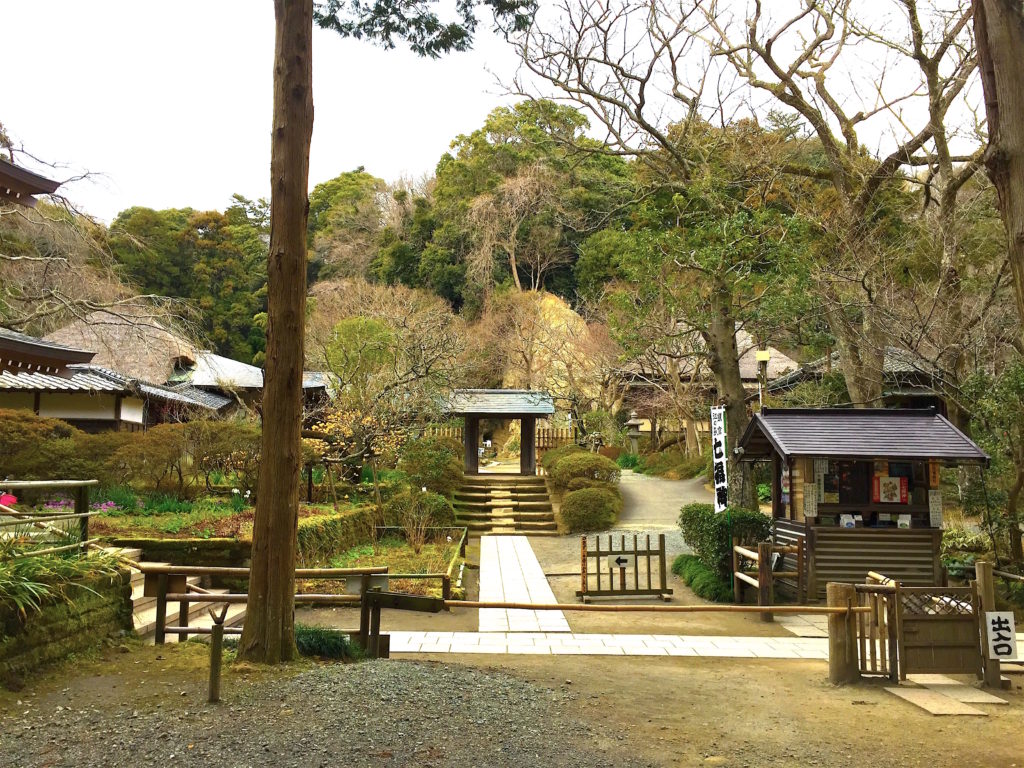 As seen in the image above, the temple has a silent environment filled with nature; rich of greenery and sounds of woods, birds, and sometimes squirrels.

The first building that appears on the path is the main sanctum of Jochi-ji, named the Donge-den for its importance. It stores three statues of Buddha, each being a symbol of the past, present, and future. The three statues were made in the Muromachi period (1336-1573), over 400 years ago.

The flowers on the left of the image are not cherry blossoms, but are flowers of Japanese plums. 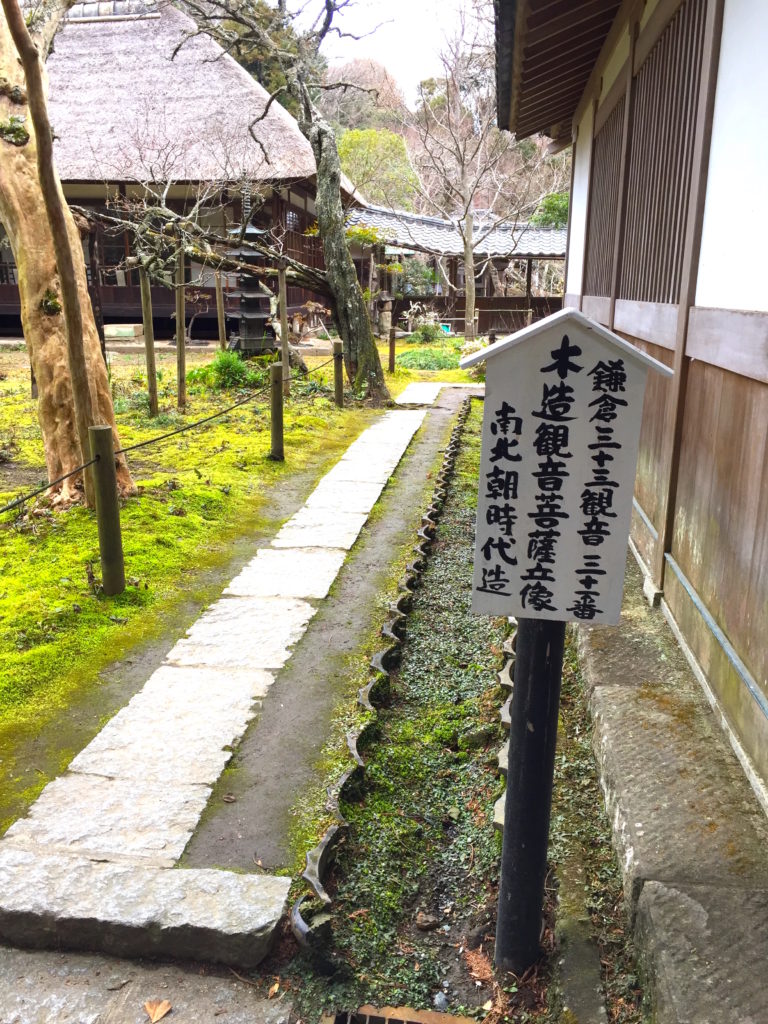 As you move on, you’ll find a wooden statue of the Kannon in the corner of the building. This statue was made during the Nanbokucho period (1336-1392), over 600 years ago. 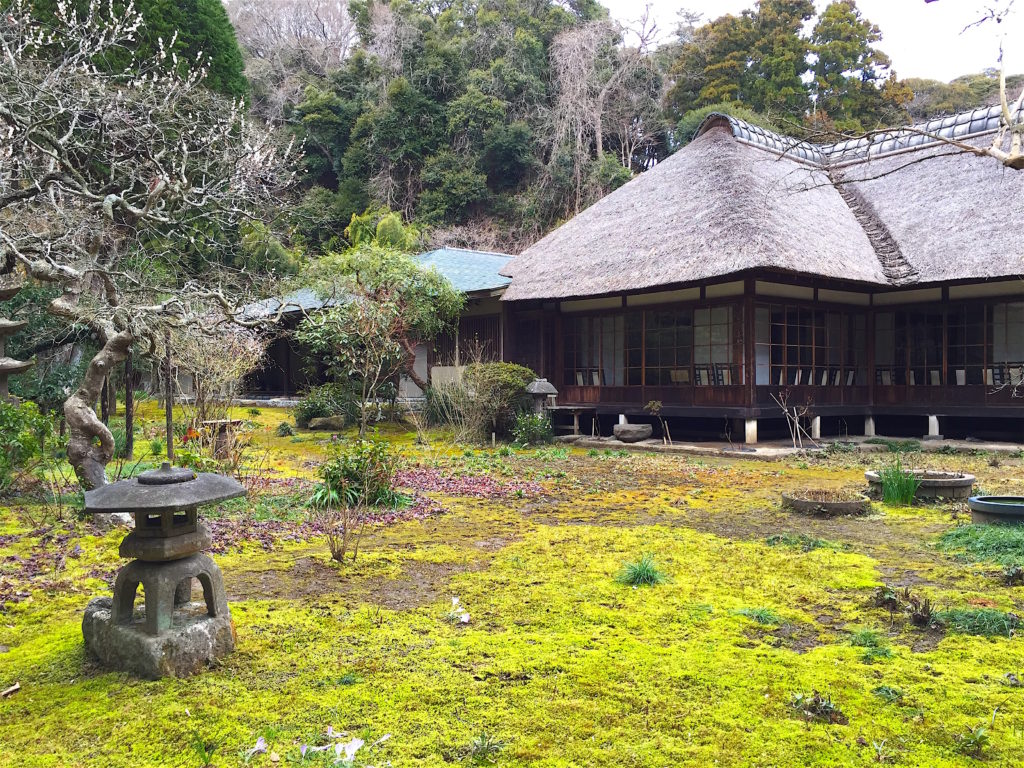 There is also a traditional Japanese house and a garden. The moss adds to the greenery of the temple, creating a relaxing environment where you can feel the atmosphere of zen. 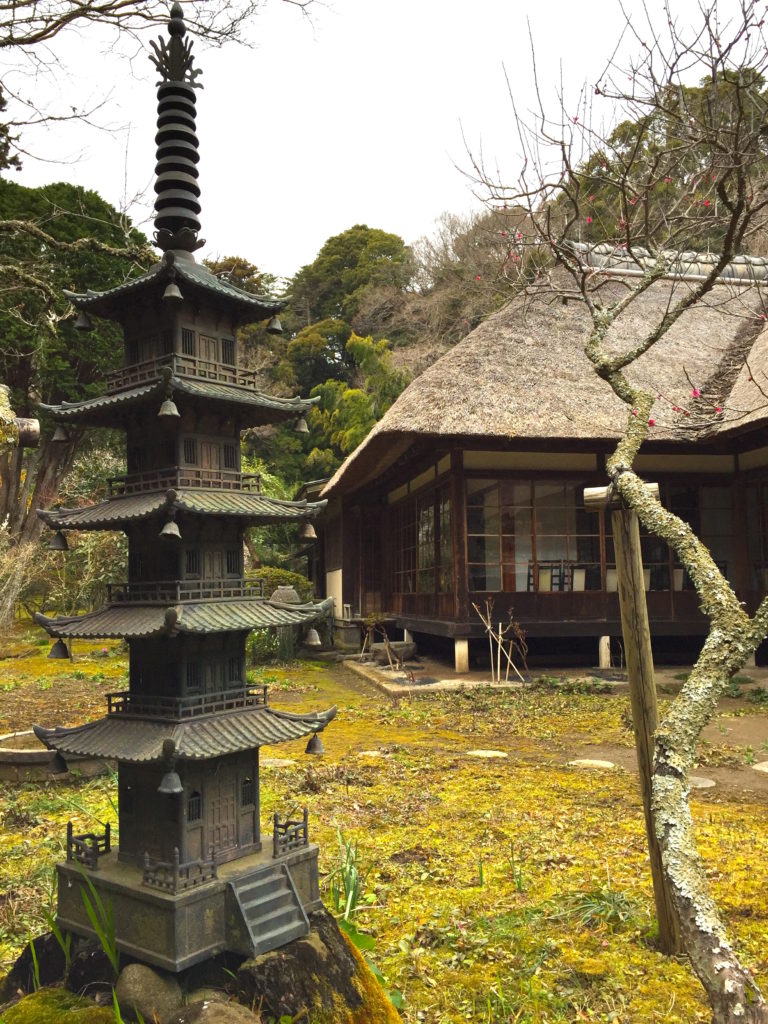 Unfortunately, the house is not open for public, so you’ll have to enjoy the view from outside.

There’s also a section of bamboos as you walk along the path. You’ll see some small caves with little statues of Buddhist monks after this section.

Another interesting thing from this temple, a red cone with a buddhist design. 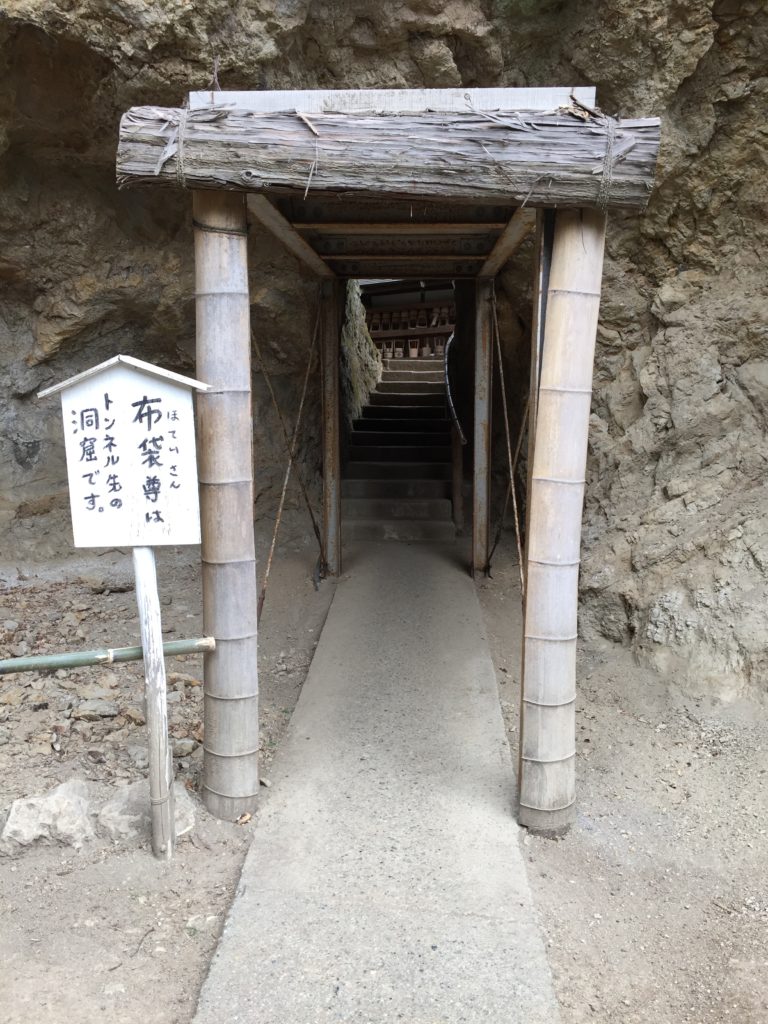 You’ll find a tunnel with a sign that says ‘walk this way’ in english. There’s a statue of Hotei-son, one of the seven gods of fortune, after you walk through this tunnel. 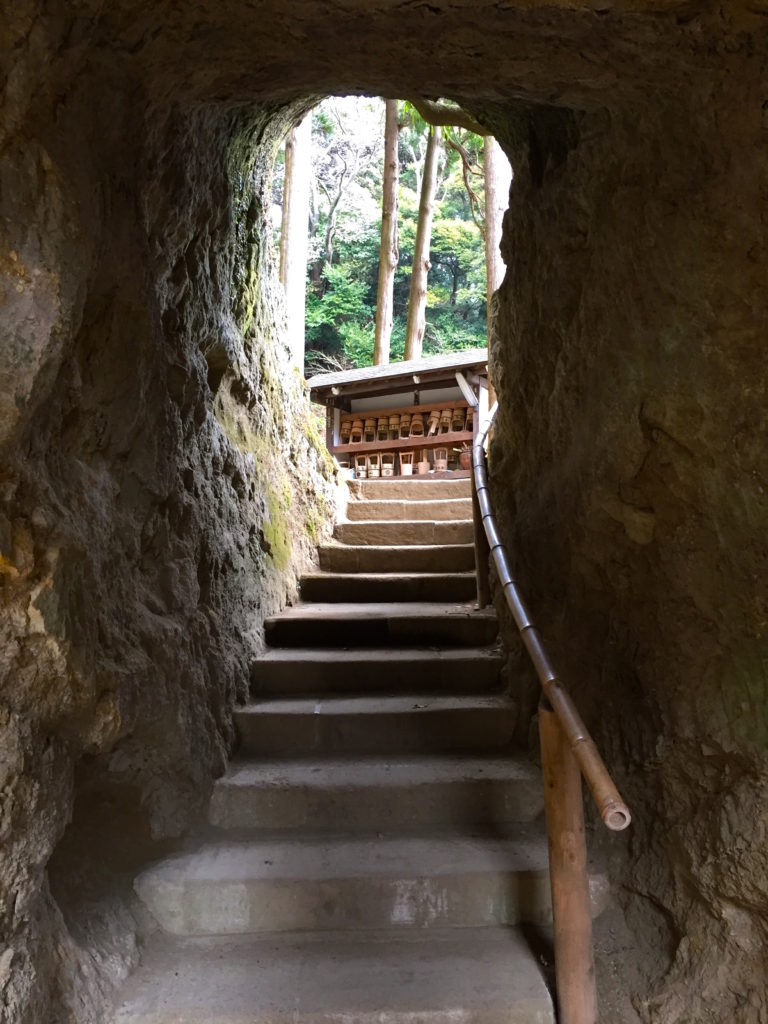 A nice view from the tunnel. It gives visitors a bit of an adventurous feeling. 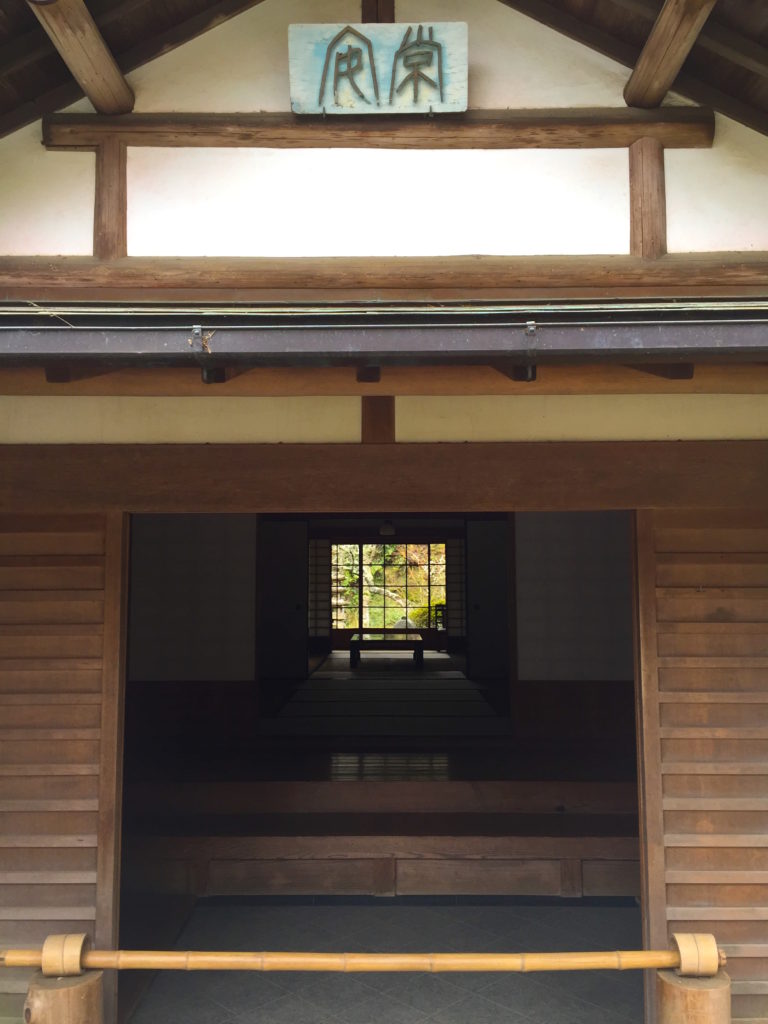 Finally visitors can take a look inside the traditional house. The bright green garden and the dark room creates a beautiful contrast.

Overall, Jochi-ji Temple is one of the Five Great Temples of Kamakura, and is a must visit location if you are aiming to visit all five zen temples. Even if you are not trying to complete all five, this large temple has various unique sights, and is great place to feel the atmosphere of zen in nature.